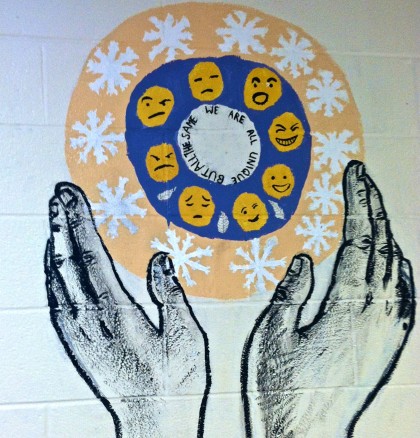 We were delighted to have Bill Westhoven of the Daily Record attend the culminating event for one of our recent artist residency programs. With great sensitivity he captured the elements of the residency and it’s impact. We invite you to read his article in it’s entirety (with photos and video) by following this link or by reading it below.

“The newest educational artist-in-residency program offered by Morris Arts recently graduated to the high school level, with students at Mountain Lakes High School premiering the results of their lessons on Friday.

Students participating there in a weeklong Peace Mural Residency program joined visual artist Jennifer Levine, songwriter Scott Massarsky, visual arts teacher Linda Aldrich and others for the unveiling of the mural they crafted with Levine.

They marked the occasion with the debut performance of an original song written in honor of the occasion, the lyrics of which unite the separate elements of the mural, painted during the last week on a corridor wall. Crowding into the hallway Friday afternoon, the students and a small band performed after Principal Jeremy Davies spoke in admiration of their efforts.

“You produced something that is honoring us,” Davies said. “We’ll have it up on the walls forever, and that’s really neat.

“Always remember you were legally able to write on the school walls,” he added with a smile. “How cool is that?”

Both the mural and the song, written by Massarsky with input from the students, were the result of the roughly 80 students in the program exploring their personal thoughts on how their actions and words can create a more peaceful world. The multidisciplinary program also celebrated the 10th anniversary of the school’s honor code (“honesty, respect, responsibility, trust”) and reflected its Long Range Education Plan that gives more emphasis to the humanities.

“(Massarsky) came to us with the song and what we did for two days with my music theory class was, we made an arrangement of it,” said Charles Sundquist, music teacher and choral director.

Aldrich said she was amazed at how the students responded to the program, which included a first-day meditation and discussion about “finding the artist within the individual.” She said the students also stepped up to conquer the logistical challenge of working together with student groups that were separated by class schedules during the school day, when most of the work was done.

‘A whole different way to create’

Under the direction of Levine and Massarsky, the students explored collaborative art and music-making, providing the inspiration for Massursky’s original musical composition and designing, sketching and painting the peace-themed mural.

“It was a whole different way to create,” said senior Christabelle Liu. “None of us were really aware of this kind of way of doing things. It was really fun. It was just like a team effort. It involves a lot of people and there’s a sense of camaraderie.”

Davies said the program also gave the school an opportunity to recommit the students to the honor code, which is exemplified in part by not having locks on the student’s hallway lockers.

“We don’t always drive the honor code lesson into the students, and we realized that 10 years later, these students were not here when it started,” Davies said.

Barbara Reuther, director of the Arts In Education program for the nonprofit Morris Arts, said the Peace Mural Residency is the latest in a series of artist residency programs offered on a fee basis to schools both within and outside Morris County.

“We have had 32 residencies this year,” she said, including programs run in Bergen, Essex, Hunterdon and Passaic counties. “We have been doing this for the last 40 years.”

Other available residency programs include Books at Play, which incorporates elements of theater; Circus Around the World with Circus Minimus, run by a former Big Apple Circus instructor; Instruments: Ancient to Future, with Digital music specialist, ethnomusicologist and educator Andy Wasserman; Mosaic and Tile Arts and Multi-Cultural Folk Dance.

Mountain Lakes is the second school in Morris County to book the Peace Mural Residency.

“We did it at Hillcrest Elementary School (Morris Township) in September and they loved it,” Reuther said. “It really engaged the community as a group and set the tone for the school year, creating a healthy, happy environment.”

Reuther, who attended the mural and song premiere, said she was pleased to see the program was more process-driven in Mountain Lakes than it has been at some other schools.

“A lot of them are more about beautification of the space,” Reuther said. “This one was really about the students creating the images, and the ideas, and brainstorming. That doesn’t always happen. This was very personal, a very intimate experience for the students.”

Reuther said educators interested in the Morris Arts residency programs can attend a showcase planned for May 14-15. For more information, visit Morrisarts.org.