The event is free to attend and will be located on the sidewalks between Wells Fargo and Starbucks Morristown, NJ. In addition to Meet Me in Morristown’s ongoing programming (business sidewalk sales & demonstrations, curated art sales and entertainment), several special activities are planned:

Enjoy a live music performance by Secret Sound at the Morristown Green at 7:00 PM to 9:00 PM 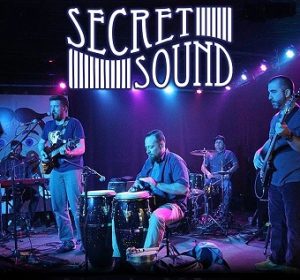 Secret Sound: With the tightness of a band that plays together a lot, and the flexibility of a band that is constantly trying to push themselves to new levels, Secret Sound is a Psychadelic Rock Dance Party on a mission. Since 2010, Secret Sound made their mark at venues on the Jersey shore, opening for other legends like Levon Helm, Dickey Betts, John Fishman, Booker T Jones, Rusted Root, Dark Star Orchestra, Umphrey’s McGee , and Chuck Berry’s pianist and songwriting partner Johnnie Johnson.

Formed on the campus of Rutgers University in New Brunswick, NJ, guitarist and vocalist Kevin Hill met drummer Adam Alexander after life on the road with the Appalachian based Barefeet and Co. Along with harmonica and mandolin player James Dalton, the trio made its debut opening for blues giant Johnny Winter at Asbury Park’s Stone Pony. The legendary music venue has become the band’s home, with a whopping 67 appearances at The Stone Pony. Bassist Dave Ferraro, whose uncanny sense of groove and a symphonic view of the band, was added to the ensemble. Ferarro has become a driving force into the direction Secret Sound, working with Hill to sculpt a sound which takes its audience on an intense journey into themselves and out with positive force.

Soon after, guitarist Andrew Gialanella and the keyboardist Andy Feldman were added to the mix and the power of the dynamic was increased exponentially. ​ What Secret Sound really is: the music, the fans, the friends, the family. Secret Sound is also a part of the wider music scene that features some of the most exciting music in the world, both familiar and unfamiliar. Making lifelong friends and creating an unshakeable family, is what Secret sound has done and will continue to do into the next decade.

Additional details for Meet Me in Morristown can be found on www.meetmeinmorristown.com

Join the fun, there is something for everyone to enjoy!

In a creative placemaking partnership with Morristown Partnership, the streets of Morristown are transformed on the last Thursday of each month from May through August. Artists showcase and sell their work, musicians are featured along the streets and many Morristown businesses operate sidewalk sales and demonstrations. By combining our business and arts communities, Meet Me in Morristown promotes our downtown, fosters entrepreneurship, highlights area artists and promises a lively and fun night out for all ages.

Meet Me in Morristown is an event created in partnership with: