A hallmark of First Night Morris County and perhaps one of the core reasons for its longevity and appeal is the high quality of talent on the program. This year’s roster once again showcased outstanding performers representing multiple artistic genres. Since its inception 28 years ago, First Night Morris has relied on Morris Arts, working for the last thirteen years with Dr. Lynn L. Siebert to program the artists for this unique event. 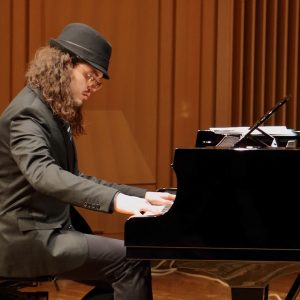 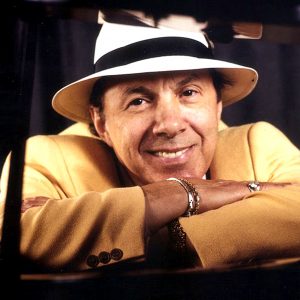 Rio Clemente, the “Bishop of jazz”

JAZZ:
What a treat it was to bring the trio of Ben Rosenblum for the first time to First Night Morris. An “impressive talent (All About Jazz),” award-winning NYC jazz pianist, accordionist and composer Rosenblum earned 4 stars from Downbeat for his 2017 debut album, Instead, and has toured extensively throughout the USA, Canada, Europe and Japan. A featured soloist at Carnegie Hall, he has performed at Lincoln Center (NY), Kuumbwa Jazz Center (California), the Library of Congress (DC) and other top venues. His unique narrative style connects with his audiences on an emotional, intellectual and spiritual level.

Of course, First Night would not be complete without our own Morristown star, the sizzling jazz pianist, Rio Clemente, the “Bishop of Jazz,” whose inventive and technically brilliant improvisations astonish and inspire all lucky enough to hear him. A capacity crowd savored the jazz and enjoyed the smooth, elegant and virtuosic jazz that night. 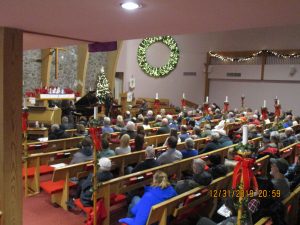 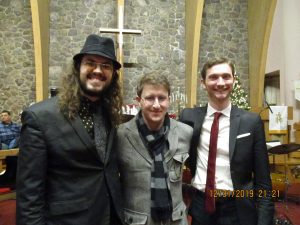 VIDEOS: For some delicious excerpts of the Ben Rosenblum Trio performing at First Night Morris County 2020, click HERE, HERE  and, closing their first set, a lively Samba for which Rosenblum plays accordion 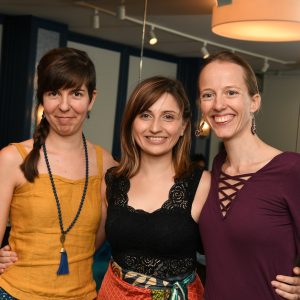 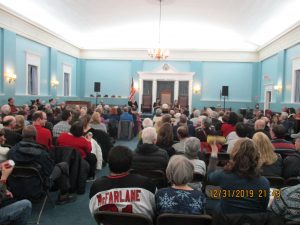 WORLD CULTURES:
Without leaving Morristown, audiences could be adventurous and sample cultural riches from Spain, Brazil, Hungary, Italy, China and Korea at First Night. New to First Night Morris, The Asaran Earth Trio is a virtuosic, all-female multinational ensemble whose unique repertoire ranges from 13th century Sephardic music to Hungarian folk song and includes contemporary and original works from around the world. Their unique arrangements for voice and percussion, colored by improvisation and contemporary harmonies, honored their own varied roots (Brazil, Hungary, Italy) and captivated listeners with their exquisite voices and the compelling, haunting quality of their music.
VIDEOS: Check out excerpts of the trio’s unique and lovely work:
Quando Veo Hijo Hermosa, a 13th c. Sephardic piece…excerpts HERE and HERE
Kis Keve Lanyom, a haunting Hungarian folk/bridal lament
An original Brazilian song by Anne Boccato (percussionist, alto in the group) about Spring/ Primavera Selah (with audience participation) and
Foreign Lander (derived from a Red Molly version). 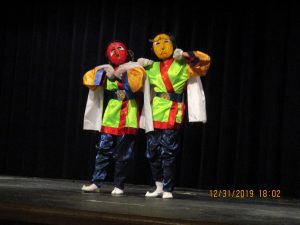 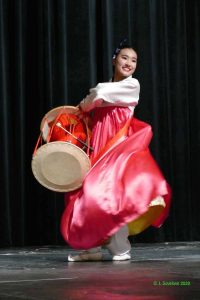 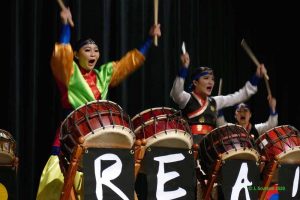 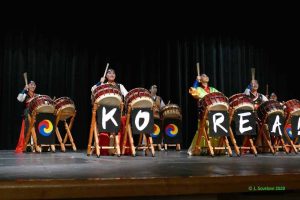 Korean Traditional Dance of Choomnoori (KTDOC) captivated the eyes and ears of audiences with their unique and fascinating blend of drumming and dancing. Preserving the rich heritage of traditional Korean dances, KTDOC performed a variety of dances showcasing the elegant costumes, their carefully synchronized, stylized gestures, dramatic drumming and movements which conveyed a wide range of emotions, related tales of village life and depicted the beauties of nature in visually stunning sequences. 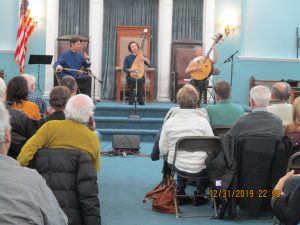 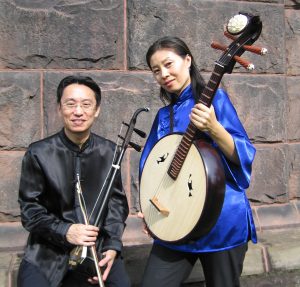 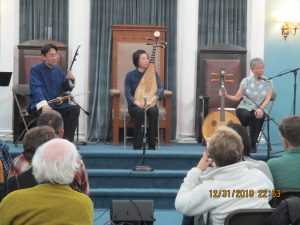 Equally entrancing was the Music from China Trio which has been hailed by the NY Times and Washington Post for their musical artistry. This renowned NYC-based ensemble, founded in 1984, has performed at the Library of Congress, Metropolitan Museum of Art, Chautauqua, the Smithsonian, festivals/residencies across the USA as well as with major symphony orchestras, chamber groups and such jazz greats as Ornette Coleman. The trio’s musicians treated the First Night audiences to an exciting and hauntingly lovely program featuring classical and folk arrangements performed on traditional Chinese instruments.
VIDEOS: Click HERE for the lively opening number, capturing a happy mood. Click HERE for Sun Li’s virtuoso solo on the Pipa (lute)- featuring a recurring theme.

Appearing for the first time at First Night Morris was The Mark Twain Experience, featuring Alan Kitty as “Mark Twain.”  Writer, humorist, riverboat pilot and inventor, Samuel Langhorne Clemens, better known as Mark Twain, was a genuine American genius. Alan Kitty’s 40 years of research, programs and performances in 22 states have made him one of the nation’s leading Twain impersonators. Kitty’s brilliantly crafted material, impeccable comic timing and uncanny likeness make audiences wonder if the real Twain is still among us. Relish the wit and wisdom that “Mark Twain” offers on all facets of American life. “We are all in the gutter, but some of us are looking at the stars.”

VIDEO: Click HERE to catch a little of Twain’s wit and wisdom.

Also new to First Night Morris was the critically acclaimed Mentalist Eric Walton. Does fate govern our lives? Is it possible to see the future? Join the international award-winning critically-acclaimed showman, raconteur, and mind-reader, Eric Walton, for a theatrical foray into the realms of parapsychology, metaphysics, and the paranormal, in which he read minds, identified hidden objects, predicted future events, and challenged conventional ideas about the limits of human perception. Walton is “Dazzling” (Zink Magazine) and “100% pure theatrical magic” (NYTheater.com).

And, as we embark on the 2020s, audiences also time travelled  back a century  to the Roaring Twenties with the crystalline-voiced Christine De Leon who brought the glittering jazz age back to life  through the enduring songs and dances of the 1920’s.

To help us all laugh in the New Year, First Night featured two wonderful comedians, both new to First Night but well practiced and highly skilled in their craft. With the mind of a comedian and the soul of a musician, Rob Paravonian seamlessly fused sharp comedy performances with top notch musicianship. This perfect blend of abilities is evident everywhere from his viral Pachelbel Rant, his observations on popular music, to his well-crafted original songs. This versatile comedian, a regular at the Chicago Improv and Zanies clubs, was on Dr. Demento Show’s Funny Five, opened for Lily Tomlin, entertained troops in Afghanistan and performed in 49 states.

VIDEOS:
HERE, Paravonian parodied Harry Chapin songs with a Disney twist, (a la the movie UP), with “Old Man in a House of Balloons.”
Inspired by the Beach Boys, Paravonian crafts his funny “Driving with Grandpa.”  And then, there’s an excerpt from his hilarious “Baby in a Bar,” observing the transformation of  his formerly “cool” and “edgy” Brooklyn neighborhood into a haven for young families.

And talented Andy Pitz who is a regular at such top New York comedy sites as The World Famous Comic Strip Live, The Comedy Cellar and Dangerfield’s. He’s also appeared on The Late Show with David Letterman, The Late Late Show with Craig Ferguson, Gotham Comedy Live, as a winner on Star Search on CBS and with national acts in Atlantic City and Las Vegas. Our First Night audiences laughed in the New Year with Andy and Rob! 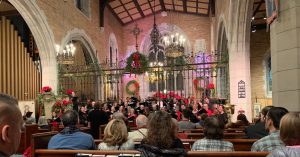 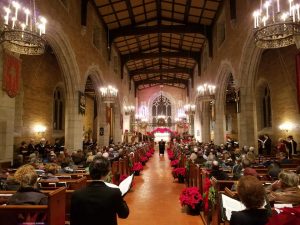 CLASSICAL:
Audiences were entranced yet again by the outstanding Harmonium Choral Society. From a Renaissance processional to the rich romanticism of Bruckner and the mysticism of Erik Esenwalds, Harmonium’s richly diverse programming and high artistic level had something for everyone. This year’s program strove for gender equity with gorgeous works by Patricia van Ness, Rosephanye Powell, Sarah Quartel, Melissa Dunphy, Mari Esabel Valverde, Andrea Ramsey and Annie Lennox. The capacity crowds were dazzled by this remarkable vocal ensemble under the inspired direction of Dr. Anne Matlack.

Classical music lovers also enjoyed the award-winning Baroque Orchestra of New Jersey which explored great orchestral works from the 17th through the 21st centuries under the baton of conductor/artistic director Dr. Robert Butts.

ROCK:
Folks packed the Mayo Performing Arts Center to hear some quality classic rock ‘n roll with The TONES who delivered a fresh and terrific blend of classic Rock, R&B and “Three Chords and the Truth,” recrafting the music they love. They drew on music by the Eagles, Van Morrison, the Beatles, Rolling Stones, Tom Petty, Ray Charles and the Allman brothers and they rocked the house at the Mayo Performing Arts Center on New Year’s Eve.
VIDEO: Catch a little of their rendition of the Crosby, Stills, Nash and Young classic, “Love is coming to us all.” 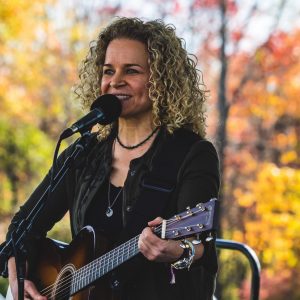 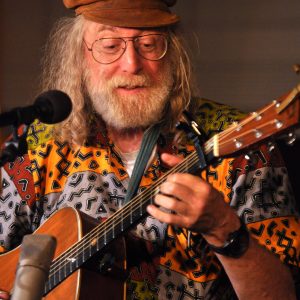 Those who adored acoustic FOLK MUSIC caught  the artistry and uniqueness of Lara Herscovitch: Contemporary Troubadour. Informed by decades of international humanitarian work, this former Connecticut State Troubadour sings her “marvelous, inventive and thought-provoking songs (NJ.com)” that inspire, inform, uplift and entertain – all with a voice “like expensive liquor” (Performer Magazine). Telling stories of misfits, underdogs, courage, love, loss, hardship, and hope, Herscovitch has performed on Prairie Home Companion and tours from Maine to Miami. Blending modern folk with blues, jazz and pop, “Lara reminds us,” as NPR’s Colin McEnroe observed, “that music can be heroic when it springs from a strong heart.” 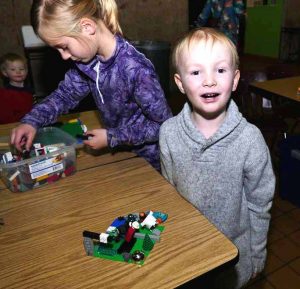 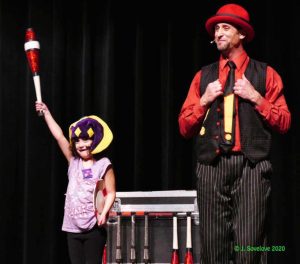 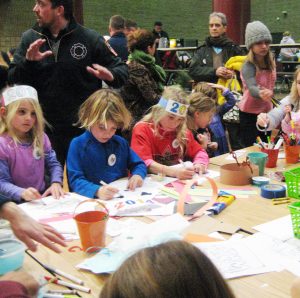 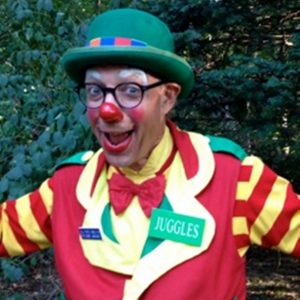 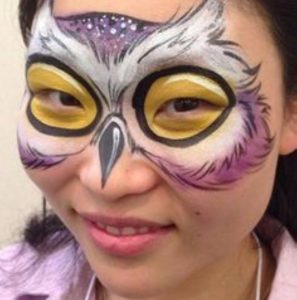 During the early session for younger children (4:45-6:45pm), the crowds marveled at audience members encased in giant bubbles, bubble volcanoes, smoke filled bubbles and other terrific bubble tricks with OMG Bubbles. Many joined in the art making activities with artist Samantha (“Sam”) Matthews’ Art 4 Kids and tried their hand building with Fun with LEGOs®. For young and old alike, Kit’s Interactive Theatre featured Kitty Jones as Grace, the Pirate and cast the audience right into the show, as part of her pirate crew! Who knew New Year’s Eve included a search for Black Beard’s hidden treasure?! Featuring circus magic, perennial favorite Benjamin Lipman’s Comedy Cascade combined circus arts, vaudeville and humor with juggling, mime and magic. Nearly 300 folks joined in Square Dancing with Caller, Mary Moody who called reels, line, circle and square dancing to western, jazz and Broadway tunes. Neither experience nor partner was needed to participate in the fun (and dancing) for all ages. Love animals? Who could resist the ever popular Rizzo’s Reptile/Wildlife Discovery which showcased live reptiles (and other animals) – under the watchful eye of a seasoned animal handler. Juggles, the Clown, brought smiles to all and many enjoyed the face painting and glitter tattoos with Gina’s Facetag at The Children’s Fun Festival. 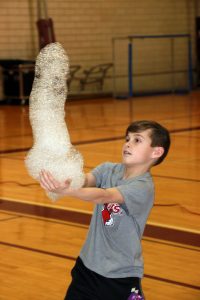 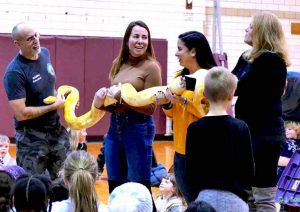 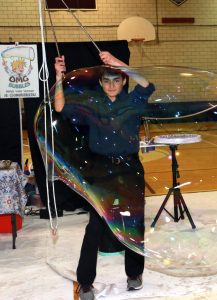 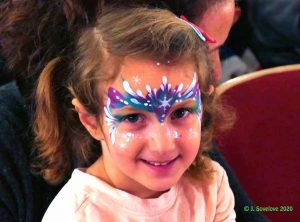 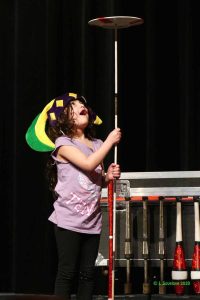 This is just a sampler of the world-class performances which have become a hallmark of First Night Morris County. There were programs to suit every age and taste along with two visual arts exhibits (displaying over 50 artworks) and two sets of fireworks. You didn’t have to travel the world or spend a fortune for tickets to experience world class live performance. It was all  in Morristown on New Year’s Eve.

First Night® Morris County, a non-profit 501(c)(3) organization, seeks to foster the public’s appreciation of visual and performing arts through an innovative, diverse, and high-quality New Year’s Eve program which offers the community a shared cultural experience that is accessible and affordable to all with Year Round Community Development Thru FNM365.