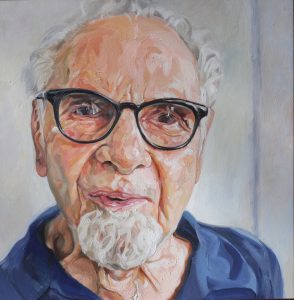 This series depicts people who are between 90 and 104 years old. For as long as I can remember, I have had an affinity for older people. As a portrait painter, I find that they often have the most interesting faces to paint. Their faces reflect much more character than those of young people, and the aging process results in elaborate planes and surfaces that are fascinating to observe and record. Similarly, older people often have remarkable and surprising stories to tell, and while some elderly are unable to enjoy their later years due to illness, poverty, isolation, or for other reasons, many still take great pleasure in their lives well into their 90s. In addition to painting their portraits, I have interviewed all of these individuals about their lives and how they are coping with aging. I have included excerpts from each interview next to the corresponding portrait. I was very moved to discover the tenacity with which many people continue to strive for fulfilling lives, and how engaged some of these individuals—90, 96, 100 years old—are mentally, physically, and creatively, in savoring each moment.