So, let’s take a trip down memory lane and sample some of the past delights of Music Beyond Borders –  Champion Irish Fiddler Brian Conway, accompanied by guitarist John Walsh, performed at MBB on the Green on June 27, 2017.

As Kevin Coughlin, Editor of MorristownGreen.com stated, Brian Conway is “second fiddle to none.”  This All Ireland champion fiddler, an unparalleled master of the Sligo style, charmed a sizable audience of over 500 on the Morristown Green.

Video below is used by permission from Kevin Coughlin, Editor of MorristownGreen.com. 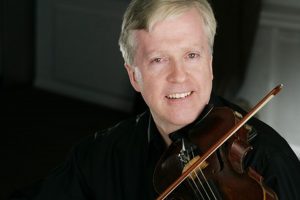 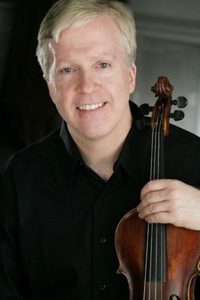 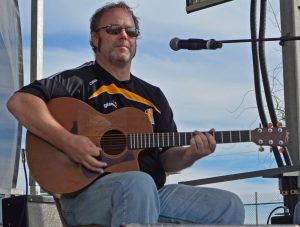 New York-born fiddler Brian Conway is a leading exponent of the highly ornamented Sligo fiddling style made famous by the late Michael Coleman. The winner of two All-Ireland junior titles in 1973 and 1974 and the All-Ireland senior championship of 1986, Brian’s early studies were with his father Jim of Plumbridge County Tyrone and with Limerick-born fiddler/teacher Martin Mulvihill. However, it was the legendary fiddler and composer Martin Wynne who taught him the real secrets of the County Sligo style. Later, Brian met and befriended the great Andy McGann of New York a direct student of Michael Coleman, who further shaped his precision and skill on the instrument. Since 1979, he has recorded 5 CDs (including on the prestigious Smithsonian-Folkways label and the prominent Irish Label, Cló Iar-Chonnachta ), collaborating with top Irish musicians and as a soloist.

A leading figure in the New York area Irish music scene, he also worked as an assistant district attorney but now, in recent retirement, devotes his full energies to the Irish fiddle and its rich tradition. The distinctness of his tone, the lift of his playing, and the deft ornamentation he brings to the tunes have placed him among the finest Irish fiddlers of any style, Sligo or otherwise. He has performed all over North America, Ireland, and Europe. He is also a noted instructor who has mentored many fine fiddle players, including several who have gone on to win All-Ireland Championships. Brian hosts regular sessions in White Plains, New York, and actively encourages countless musicians in the art of Irish music and fiddle playing.

Brian was accompanied by John Walsh, Irish-American guitarist, singer, and producer who has travelled across Europe and the US performing and teaching guitar with Paddy Keenan, Pat Kilbride, Jameson’s Revenge, Brian Conway, among others. Walsh recorded many well-received albums and educational videos. (He also treats people with Healing Tibetan Singing).

MorristownGreen.com covered the event – and you can check out the article, photos and video HERE.
And here are some of the PHOTOS  from the performance: 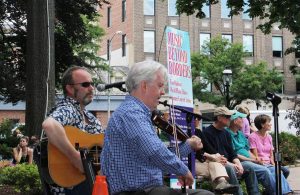 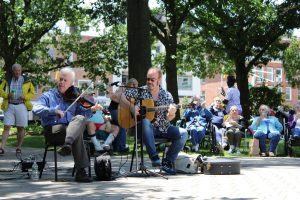 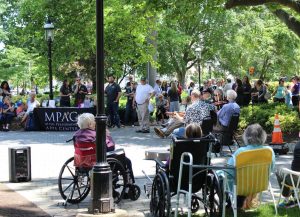 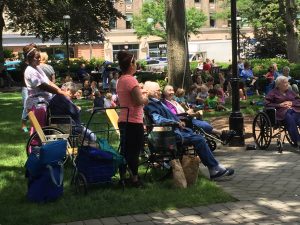 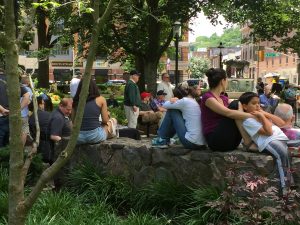 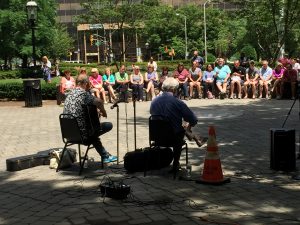 View of audience from performers’ vantage 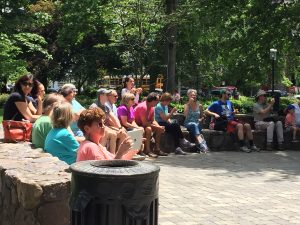 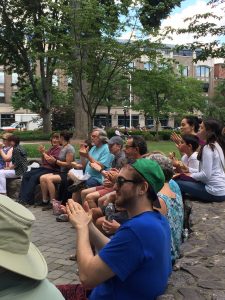 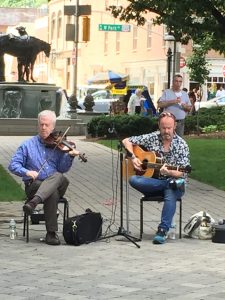