So, let’s take a trip down memory lane and sample some of the past delights of Music Beyond Borders – Indian Ragas and Rhythms, from July 12, 2016.

In this clip,  you can hear the buildup through rapid fire, intricate “unfolding” of the raga line sung by Andrew Schantz (to the harmonium drone) with the complex rhythmic accompaniment by Shivalik Ghoshal on tabla.

and below is a closeup of the intricate tabla drumming technique by Shivalik Ghoshal accompanying Andrew Schantz, vocalist and harmonium player:

And here are some PHOTOS from their performance: 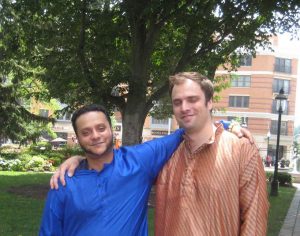 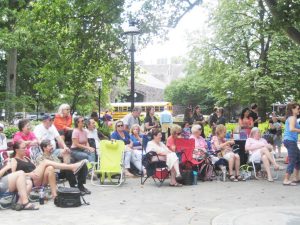 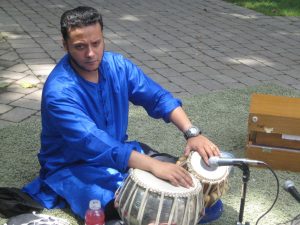 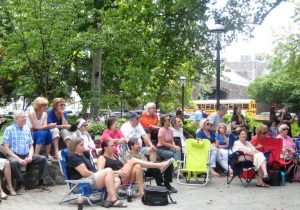 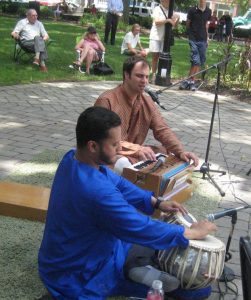 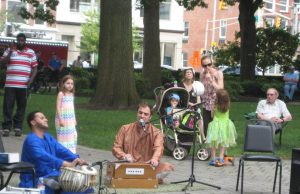 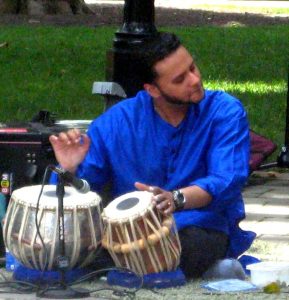 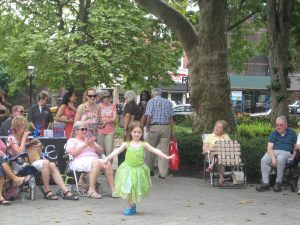 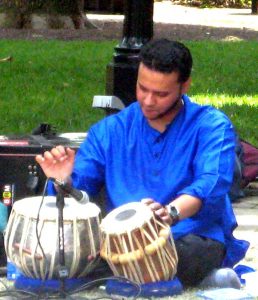 The Assistant Director of Iselin’s Manjari School of Performing Arts as well as a tabla teacher, Shivalik Ghoshal performed all of the tabla drumming for the soundtrack of Academy Award-winning documentary Born into Brothels (2004) as well as at Lincoln Center with santoor maestro Sri Satnaam Singh. The recipient of grants from New Jersey State Council on the Arts, Namashkar Foundation (CT), and Asian Arts Initiative (PA), Shivalik also received a citation from the New Jersey state legislature. He is currently working with Mary Zimmerman and Doug Peck on re-orchestrating the jazz/classical Indian-based music of The Jungle Book for productions at the Goodman Theatre and Huntington Theatre Company in Chicago.

Andrew Shantz is a keyboardist, vocalist, composer, producer and educator with a foundation in jazz and a penchant for musical exploration. Since 2008, he has been immersed in the world of Hindustani-North Indian – classical music as a vocalist and harmonium player with studies in Kolkata (Calcutta), India uIn 2012, Andrew founded Vanguard Music Studio with partners Anna Evangelista and Attila Mozsolits, offering musical instruction in private lessons, group classes and ensembles and in special workshops and performances.

Both Shivalik and Andrew participate in the Brooklyn Raga Massive (BRM), a cooperative alliance of  Indian classical musicians in the Brooklyn, NYC area. Managed by the artists, the Massive is a platform for all lovers of Raga music, (listeners and practitioners), to network, present concerts, lecture demonstrations, festivals, panel discussions and provide educational outreach to all ages. Breaking conventional formalities, the Massive presents top-notch Indian Classical and Raga-inspired musicians, in all their diversity, hosts local events, and weekly Raga Music Jam Sessions in Prospect Heights, Brooklyn.